Cyberse / Link / Effect 3+ Effect Monsters
If this card is Link Summoned: You can place counters on this card equal to the number of Cyberse monsters in your GY of a different monster card type (Ritual, Fusion, Synchro, or Xyz). Gains 2500 ATK for each of these counters on this card during the Battle Phase only. When your opponent activates a monster effect (Quick Effect): You can remove 1 counter from this card; negate the activation, also if this effect was activated between this card's attack declaration and the end of the Damage Step, it can make a second attack in a row.ATK/3000 [LINK-5]
CARD ID: 68934651
STATUS TCG: Unlimited
Powered by yugioh.wikia.com 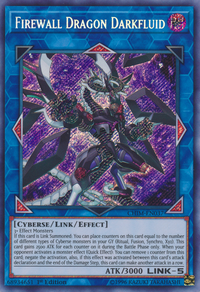 This monster is the cover card of Chaos Impact. This card is the first legal Link-5 monster to be released in the OCG/TCG. This card is named after dark fluid, an alternative theory to both dark matter and dark energy in which it attempts to explain both phenomena in a single framework. This monster is the evolved form of Firewall Dragon. Since it is a DARK Link Monster, it can also be considered a dark counterpart.Unlike its pre-evolved form, this card is not Forbidden. In the anime, this card was created with the combined power of the 5 Ignis absorbed by Bohman, similar to Chimera Hydradrive Dragrid and Perfectron Hydradrive Dragon. The color scheme of this monster references 5 of the Ignis. Ai: The purple bits of its armor and wings. Aqua: The blue bits of its armor and wings. Earth: The brown bits of its armor. Flame: The red bits of its armor. Windy: The green color scheme of its body and on its wings. Much like their pre-evolved forms, this monster can be considered a rival to Borrelend Dragon.