Normal / SpellSpecial Summon 1 "Metal Fiend Token" (Fiend/DARK/Level 1/ATK 0/DEF 0). It cannot attack. Your opponent takes any battle damage you would have taken from battles involving it. During each of your Standby Phases, pay 1000 LP or destroy this Token.
CARD ID: 24874630
Powered by yugioh.wikia.com 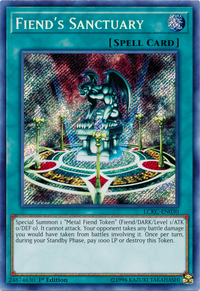 In the anime, the Metal Fiend Token appears to be made up of connected balls of metal rather than the creature shown in the card's artwork. The symbol underneath the statue in this card's Japanese artwork is a Pentacle. For some odd reason, this card appeared in Yami Marik's hand in the dub (taking the place of his Bait Doll which was present in the Japanese) during his Duel with Yami Yugi even though he was unfamiliar with the card when Yami Yugi played it. Seto Kaiba said that this was the only card that could defeat The Winged Dragon of Ra. However, Yami Yugi managed to defeat Ra later using Ragnarok.

The Token Monster is treated as a Normal Monster.

Paying Life Points during your Standby Phase is a Maintenance Cost for the "Metal Fiend Token".

The damage that the opponent receives by the battle of "Metal Fiend Token" becomes Battle Damage.

After the opponent receives the Battle Damage, the "Metal Fiend Token" is destroyed by battle.

If there is no open space in you Monster Card Zone

The payment is a maintenance cost, paid to keep the "Metal Fiend Token" on the field. If you do not pay, it is destroyed. This is not a targeting effect. It will not be protected by "Heart of Clear Water".