62 Level 6 Dinosaur-Type monsters
This card cannot be destroyed by card effects while it has Xyz Material. When your opponent Special Summons a monster(s): You can detach 1 Xyz Material from this card; destroy that monster(s).2600/1000
CARD ID: 18511599
Powered by yugioh.wikia.com 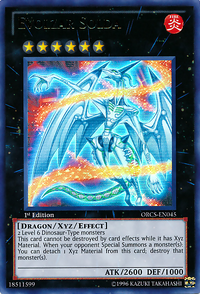 This card's name could be interpreted as Sordes, a pterosaur whose name means hairy devil. This is the third Rank 6 Xyz Monster to be released in the card game; the first one was Queen Nereia the Silvercrown, and the second was Inzektor Exa-Beetle.Both this card and Exa-Beetle appeared in the same set, though the latter was revealed first. This card has the highest Rank and ATK among the Evolzar monsters; on the other hand, it also has the lowest DEF. This is the third Evolzar monster, the first being Evolzar Laggia and second being Evolzar Dolkka. This is the third Dragon-Type monster to support Dinosaur-Type monsters. This card is shown in the artwork of Xyz Wrath and Xyz Discharge.

The effect that destroys monsters that are Special Summoned cannot be activated during the Damage Step.

Detaching 1 Xyz Material is a cost.