8You can Tribute Summon this card by Tributing 1 Tribute Summoned monster. If this card is Tribute Summoned: You can send 2 "Monarch" Spell/Trap Cards with different names from your hand and/or Deck to the Graveyard, and if you do, shuffle 1 card from your opponent's hand (at random), Graveyard, or their side of the field into the Deck. Once per turn, during either player's Main Phase, if this card is in your Graveyard: You can discard 1 "Monarch" Spell/Trap Card, then target 1 monster in your Graveyard with 2400 or more ATK and 1000 DEF; add it to your hand.2800/1000
CARD ID: 23064604
Powered by yugioh.wikia.com 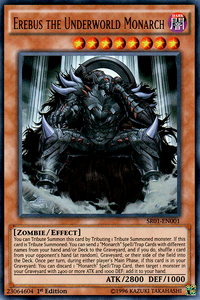 Erebus, in Greek mythology, is the personification of Darkness, and the brother-mate of Nyx , the personification of the Night. This monster is the first Zombie-Type Monarch monster. This monster appears in the artworks of The First Monarch and Domain of the True Monarchs as a silhouette. It also appears clearly in the artworks of Pantheism of the Monarchs and Reawakening of the Emperor. It is interesting to note that the card The First Monarch can be Special Summoned as a Fiend-Type/Level 6/ATK 1000/DEF 2400 monster, while Erebus is a Zombie-Type/Level 8/ATK 2800/DEF 1000 monster.The aforementioned artworks also suggest that he was the First Monarch, implying that he had died and was later resurrected as a zombie-type. Another explanation could be that, if following the Greek mythological background. Erebus was one of the first beings to come into existence (as one of Khaos's children), which would literally make Erebus the first of the Monarchs to have existed.The artwork of  Pantheism of the Monarchs seems to imply a possible connection between Erebus and Ehther the Heavenly Monarch.In Greek Mythology, Aether (the deity Ehther appears to be inspired from) is the child of the god Erebus.