3When this card is Normal Summoned: You can target 1 Level 3 or lower Dragon "Dragunity" monster in your GY; equip that target to this card. You can send 1 "Dragunity" card from your Spell & Trap Zone to the GY, then target 1 face-up monster your opponent controls; destroy that target.1200/800
CARD ID: 54578613
Powered by yugioh.wikia.com 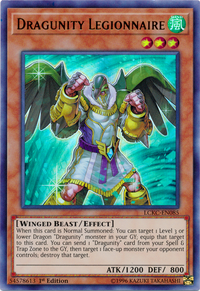 A Legionnaire refers to a member of a legion, especially the French Foreign Legion. It was also a term used for soldiers of the Roman Legion, which may be the origin for this cards name, since a lot of the names for the Dragunity monsters seem to be based on Latin terms. This card's Japanese name is almost  identical to the English name of the Structure Deck it appears in.

The effect of "Dragunity Legionnaire" which equips one monster to it targets one "Dragunity" monster in the Graveyard.

Sending one "Dragunity" card from your Spell & Trap Card Zone to the Graveyard is a cost to activate the effect of "Dragunity Legionnaire" which destroys an opponent's monster. This effect targets one face-up monster on your opponent's field.