61 Dragon Tuner + 1+ non-Tuner Winged Beast monsters
When this card is Synchro Summoned: You can target 1 Level 3 or lower Dragon "Dragunity" monster in your GY; equip that target to this card. Once per turn: You can send 1 Equip Card equipped to this card to the GY; double this card's ATK until the end of this turn.1900/1200
CARD ID: 21249921
Powered by yugioh.wikia.com 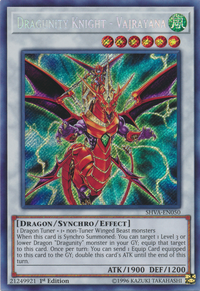 Vajuranda is a spear which appears in the Ancient Indian Epic Rāmāyana (Sanskrit:रामायण). Vajra is a Sanskrit word meaning both thunderbolt and diamond. Vajrayana (translated as Thunderbolt Way or Diamond Way) is also one of the three major branches of Buddhism. The sword Vjaya is found in some of Konami's Castlevania. The knight riding Vajrayana appears to be Dragunity Militum, and it is riding a grown-up Dragunity Corsesca".

The equipping effect targets the “Dragunity” monster in your Graveyard.
Sending 1 Equip Card equipped to this card to the Graveyard is a cost.