4Gains 200 ATK for each "Dragunity" card you control. When this card is Normal Summoned: You can target 1 Level 3 or lower Dragon "Dragunity" monster in your GY; equip that target to this card.1500/1000
CARD ID: 28183605
Powered by yugioh.wikia.com 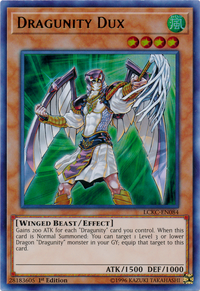 Dux is Latin for leader (from the verb ducere, 'to lead') and later for Duke. In the era of Republican Rome, dux could refer to anyone who commanded troops, such as tribal leaders. With a name like this, it is possible that Dux is the commander of the Dragunity tribe, or at least a section of it. Due to Duce (Italianization of Dux) being used as the title of Benito Mussolini, the leader of Fascists, this card's Italian name uses Condottiero (meaning in fact Troop leader) instead, to avoid negative connotations.

The effect of "Dragunity Dux" targets one "Dragunity" monster in your Graveyard.

When determining the ATK of "Dragunity Dux", "Dragunity" cards in your Spell & Trap Card Zone are also counted.

When resolving the effect of "Dragunity Dux", if the targeted Dragon-Type monster is no longer in the Graveyard, then that monster is not equipped.