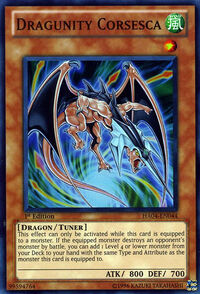 This card is based on the Corseque (also known as the Corsesca), a type of pole weapon with a three-bladed spear head used mostly in the 16th and 17th centuries.

None of the text of "Dragunity Corsesca" is treated as the effect of an Effect Monster.

The effect of "Dragunity Corsesca" which draws a card{{sic is treated as the effect of an Equip Spell Card. Thus, it can be negated by effects like that of "Silent Swordsman LV7".