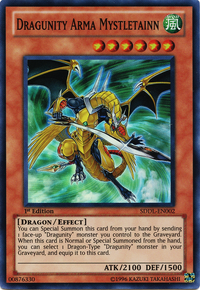 This card's name comes from the Mistilteinn, a sword of Norse mythology. The sword  is also found on some of the Konami's Castlevania games. This card is most likely a younger version of Dragunity Arma Leyvaten since they have similar effects and designs.

The effect of "Dragunity Arma Mystletainn" targets one Dragon-Type monster in your Graveyard.