2When this card is Normal Summoned, you can Special Summon 1 "Dragunity" monster from your hand, then equip it with this card. When this card is sent to the Graveyard while equipped to a monster, select 1 card on the field, and destroy it.1000/800
CARD ID: 36870345
Powered by yugioh.wikia.com 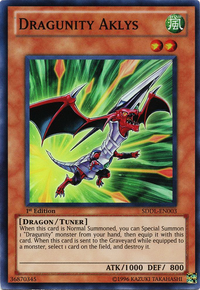 This card is based on Aklys, a Roman javelin. This card appears in the background of Dragon Ravine. This is confirmed in Yu-Gi-Oh! 5D's Tag Force 5 and 6 with its animation. This card might possibly be featured in the artwork of Dragunity Knight - Vajrayana as the dragon in mature form. This card has a lswarm counterpart, Evilswarm Zahak.