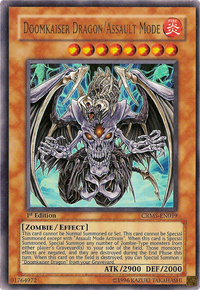 This monster appears in the artwork of Assault Counter.

You can, for example, Summon 1 Zombie from your opponent’s Graveyard, and 2 from yours, etc. This effect targets 1 or more monsters in the Graveyard(s).

The effect which Special Summons any number of Zombie-Type monsters targets those monsters.

After the monster is Special Summoned, the effect does not continue to target the monster.

If "Doomkaiser Dragon/Assault Mode" is removed from the field, then the Special Summoned monsters still have their effects negated and are still destroyed during the End Phase.

When "Debris Dragon"/"Black Salvo"/"Doomkaiser Dragon/Assault Mode"/etc Special Summon a monster with an effect that activates in the Graveyard like "Sangan"/"Giant Rat"/"Mystic Tomato"/etc, then that effect is not negated. This is because "Debris Dragon etc only negate effects which activate or are applied on the field.