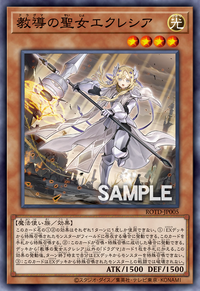 According to concept art revealed on the official Yu-Gi-Oh! OCG Twitter account, Ecclesia is the main heroine of the Dogmatika storyline. She is also known to eat a lot of meals. The symbol that appears on her weapon is referenced in the concept art as well, noted as the organization's symbol, the Tetradragmaton. This monster appears in Dogmatika Encounter, Dogmatika Punishment, Nadir Servant, Dragmatism, Tribrigade Line, Tribrigade Revolt, Tribrigade Oath, and Stigmavore Dragon Brigand.