Counter / TrapWhen a monster effect is activated in the hand or Graveyard: Negate its activation, and if you do, banish it.
CARD ID: 65703851
Powered by yugioh.wikia.com 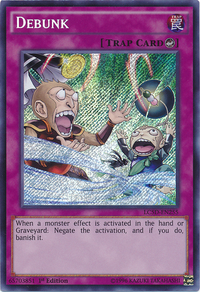 Shien's Footsoldier and Shien's Squire appear in this card's artwork. The effect of Shien's Footsoldier activates in the Graveyard and the effect of Shien's Squire activates in the hand, hence their appearance. The appearance of an unknown Ninja in this card's artwork further shows a rivalry between the Six Samurai and Ninja archetypes, as shown in Blind Spot Strike.

You can activate this card during the Damage Step, including during damage calculation.

If the monster whose effect was negated by "Debunk" is not in the same place where the effect was activated when "Debunk" resolves, you do not remove it from play.

If you aren’t allowed to remove monsters from play because of "Imperial Iron Wall", you cannot activate "Debunk".