4When this card is Normal Summoned: You can target 1 monster with 500 or less ATK in your GY; Special Summon that target in Attack Position, but negate its effects. Cannot be used as Synchro Material, except for the Synchro Summon of a Dragon monster. The other Synchro Material(s) cannot be Level 4.1000/2000
CARD ID: 14943837
STATUS TCG: Unlimited
Powered by yugioh.wikia.com 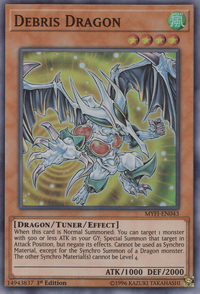 This monster looks like a younger version of Stardust Dragon.

The effect of “Debris Dragon” is a Trigger Effect that activates when it is Summoned and targets 1 monster in the Graveyard. “Debris Dragon” does not continue to target that monster after the other monster is Special Summoned.

All restrictions on “Debris Dragon” and Synchro Summons are condition{{SpanSkill Drain”.

You cannot use “DNA Surgery”, naming Dragons, to use “Debris Dragon” to Synchro Summon a non-Dragon Synchro Monster. The Synchro Monster must originally be a Dragon-Type monster.

The effect which Special Summons a monster from your Graveyard with 500 ATK or less is a Trigger Effect that targets the monster.

After the monster is Summoned, the effect does not continue to target the monster.

"This card can only be used as a Synchro Material Monster" is not treated as an effect. It cannot be negated by "Skill Drain".

When "Debris Dragon"/"Black Salvo"/"Doomkaiser Dragon/Assault Mode"/etc Special Summon a monster with an effect that activates in the Graveyard like "Sangan"/"Giant Rat"/"Mystic Tomato"/etc, then that effect is not negated. This is because "Debris Dragon etc only negate effects which activate or are applied on the field.

If a monster's effects are already being negated by an effect like "Forbidden Chalice" or "Debris Dragon", then you may not choose it as a target for the effect of "Majestic Star Dragon" which negates the effects of a monster.