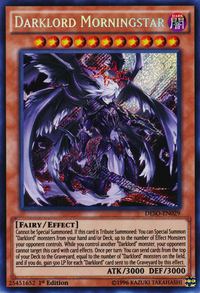 This Japanese card name derives from Lucifer: a religious figure who is usually associated with Satan. The english name is based on Lucifer's meaning, Morning Star or Bringer of Dawn. This card's effect to summon other Darklords parallels how Lucifer led the rebellion in Heaven and how, upon being the first to fall from grace, other angels followed him in said path.In Yu-Gi-Oh, the event of this card's rebellion against the old man appears in Solemn's cards is depicted in Darklord Rebellion. This card and Flower Cardian Willow are currently the only Level 11 Normal Summon Monsters. This card has an evolved form, "".