8"Dark Magician" + "Buster Blader"
Must be Fusion Summoned. When a Spell Card is activated (Quick Effect): You can discard 1 card; negate the activation, and if you do, destroy it. This card must be face-up on the field to activate and to resolve this effect. Gains 500 ATK for each Dragon monster on the field and in the GY.2900/2400
CARD ID: 98502113
STATUS TCG: Unlimited
Powered by yugioh.wikia.com 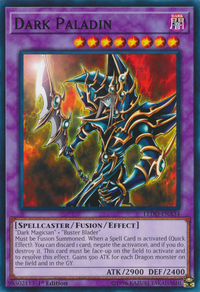 This monster is the cover card for both Magician's Force and Duelist Pack: Yugi. When the 1st Edition packs of Magician's Force were released, the artwork for this card was that of the Duel Master's Guide Dark Paladin. It was later corrected. This monster further suggests that Buster Blader and Dark Magician may have some connection. The two monsters do resemble each other, especially in their armor, and their attack and defense power is somewhat alike. They are counterparts, also, in one being a physical attacker (Warrior), and the other a magical one (Spellcaster). Also, Skilled White Magician and Skilled Dark Magician, the two cards that can Summon Buster Blader and Dark Magician respectively, share very similar ATK, DEF and effect. This monster also has a Trap negating counterpart, in Sorcerer of Dark Magic, who also must remain face-up on the field to resolve its effect. Yugi also Special Summoned that monster using Dark Magician in Yu-Gi-Oh! The Movie: Pyramid of Light, in that case Tributing it instead of using it as a Fusion Material. The explosion in the background of the Duelist Pack: Yugi version looks similar to the card art of Diffusion Wave-Motion, the card Yugi used on Dark Paladin to win his Duel against Kaiba in the Battle City Finals. This is the first Nomi Fusion Monster to be released in the TCG. This card's first OCG (but second TCG) artwork is taken from , specifically from the panel showing this monster being Summoned. This card's second OCG (but first TCG) artwork is taken from the title page for . This card's third OCG/TCG artwork is taken from , specifically from the next panel after this monster attacked, showing the 3 Blue-Eyes White Dragons exploding. However, he has his right arm stretched out further and raised higher in the manga. This card has 100 ATK more than and 100 DEF less than Buster Blader, the Dragon Destroyer Swordsman, another Fusion Monster that lists Buster Blader as one of its Fusion Materials.

Even if "Dark Paladin" is sent to the Graveyard after being Fusion Summoned, it cannot be Special Summoned by the effect of "Monster Reborn".

The effect "This card gains 500 ATK for each Dragon-Type monster on the field or in either player's Graveyard." is a Continuous Effect.

If the number of Dragon-Type monsters on the field or in either player's Graveyard changes, this card's ATK also changes.

The effect "During either player's turn, when a Spell Card is activated: You can discard 1 card; negate the activation, and if you do, destroy it. This card must be face-up on the field to activate and to resolve this effect." is a Quick Effect. (It does not target. Discarding 1 card is a cost to activate this effect. It can be activated during the Damage Step.)

You can use "substitute" Fusion Material Monsters such as "Goddess With the Third Eye", etc. to Fusion Summon "Dark Paladin".

"Dark Paladin"s Spell-negating effect is a Quick Effect, so it can be activated during your opponent's turn.

You can activate "Dark Paladin"s Spell-negating effect multiple times in the same chain.

"Dark Paladin"s +500 ATK effect is a Continuous Effect. While "Skill Drain" is active, the effects of "Dark Paladin" are negated.

If you activate "Dark Paladin"s Spell-negating effect, and your opponent chains "Ring of Destruction" to destroy "Dark Paladin", the Spell Card is still negated even though "Dark Paladin" is destroyed.