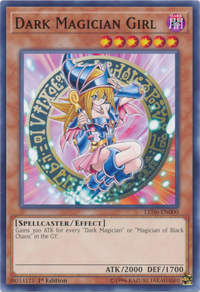 Magician Gal. In the anime, she also fuses with The Eye of Timaeus to form Dark Magician Girl the Dragon Knight In fact, “Magi Magi

Magician Gal” was originally intended to simply be another Alternate artwork for this card, before it was made into a new monster. This monster has several counterparts from different series. Yu-Gi-Oh! GX: Card Ejector Yu-Gi-Oh! ZEXAL: Gagaga Girl Yu-Gi-Oh! ARC-V: Xiangsheng Magician Yu-Gi-Oh! VRAINS: Cyberse Witch Yu-Gi-Oh! SEVENS: Sevens Road Witch Dark Magician Girl is themed after the magical girl manga and anime subgenre, while retaining a shonen undertone. The third artwork of Dark Magician Girl is based on the first artwork of Dark Magician. Both artworks feature the Magicians holding their hats with their left hands, holding their scepters with their right, floating in front of the Magicians seal with their knees bent and their legs tucked in. In the 20th tome of the manga, when Yugi Summoned Dark Magician Girl during his Duel against Strings she appears the same way she is drawn on this artwork, and remained in this position until her destruction. Newer reprints for this card (in Starter Deck Yugi Reloaded and Premium Gold) do not have the 8-digit passcode. This is one of the few times a card is reprinted without a passcode. This card is the only Magician Girl monster to have one effect instead of two. If you count all of her artworks, including the uncensored ones with minor differences like the pentagram and her cleavage, then this monster has the most artworks out of any monster in the TCG/OCG, beating out “Blue-Eyes White Dragon” who has 8, and “Dark Magician” who has 7. This is arguably one of the most iconic monsters of the franchise, behind “Blue-Eyes White Dragon”, “Dark Magician”, and “Red-Eyes Black Dragon”.

Lone Wolf: If you have "Monk Fighter" targeted by "Lone Wolf", the following are examples of monster effects that will NOT be negated because they are not applied to a monster:"Dark Magician Girl" (her ATK is still increased by her effect)