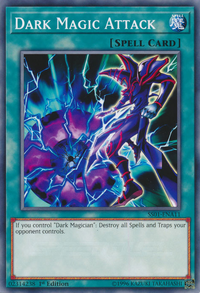 If you activate "Dark Magic Attack", and the "Dark Magician" is removed from the field with "Interdimensional Matter Transporter" or "Compulsory Evacuation Device", or flipped face-down with "Book of Moon", or destroyed by "Ring of Destruction", "Dark Magic Attack's" effect still resolves.