Dark Armed, the Dragon of Annihilation

72+ Level 7 monsters
Once per turn, if you have exactly 5 DARK monsters in your GY, you can also Xyz Summon "Dark Armed, the Dragon of Annihilation" by using 1 Level 5 or higher DARK Dragon monster you control as material. You can detach 1 material from this card, then target 1 card your opponent controls; destroy it, then banish 1 card from your GY, also, this card cannot attack for the rest of this turn.2800/1000
CARD ID: 78144171
STATUS TCG: Not yet released
Powered by yugioh.wikia.com 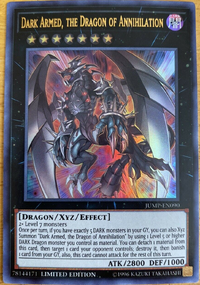 The effect of "Dark Armed, the Dragon of Annihilation" cannot be activated unless you are able to destroy 1 card on your opponent’s field and banish 1 card from your Graveyard, meaning you cannot activate it if you have no cards in your Graveyard. (You cannot detach an Xyz Material to activate the effect.)