1Pendulum Effect: Once per turn, when an opponent's monster declares an attack: You can target 1 "D/D/D" Synchro Monster you control; destroy as many monsters your opponent controls as possible with DEF less than or equal to the targeted monster's ATK, and if you do, inflict 1000 damage to your opponent for each monster destroyed. Monster Effect: 1 "D/D" Tuner + 1+ non-Tuner "D/D/D" monsters
Your opponent cannot target monsters you control with card effects. If another monster is Normal or Special Summoned while this monster is on the field (except during the Damage Step): You can make your opponent choose 1 Pendulum Monster they control, and all other monsters they currently control have their effects negated. If this card in the Monster Zone is destroyed: You can place this card in your Pendulum Zone.3500/3000
CARD ID: 72402069
Powered by yugioh.wikia.com 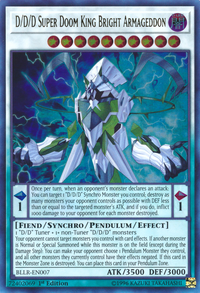 This monster is an upgraded Synchro version of D/D/D Doom King Armageddon. This card's name is a reference to the fact that Synchro Monsters have white card frames. Like the other Super Doom King monsters, this monster resembles a final antagonist from another series: Z-one, the main antagonist from the Yu-Gi-Oh! 5D's anime. The shape and color of this monster's face resembles the mask worn by Z-one. This monster's large arms resemble the arms on Z-one's armor, which he uses to manipulate his cards when he Duels. When this card activates its effect, it releases yellow energy in the shape of a card at the opponent's monsters, possibly a reference to the cards contained in Z-one's tubes. Fittingly, this resemblance is also an allusion to the fact that this was the era where Synchro Monsters were played frequently. This monster also bears physical similarities to Aporia in his final form.  The golden ring on this monster's back and the layered armor plating on the lower body are similar to those worn by Aporia.