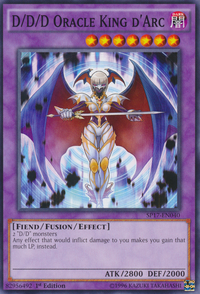 This monster is based on the historical figure Joan of Arc (French: Jeanne d'Arc), a key figure in the French victory of the Lancastrian War. The Oracle in this card's name is likely based on Joan's claims to have received visions from the archangel Michael to assist in the Lancastrian War. This monster is most likely named as a King to fit in with the naming scheme of other D/D/D monsters, which all use the title King in their names, despite the fact that this monster is a female. This monster appears to be strongly related to St. Joan and Guardian Angel Joan in that they all are Level 7 and share 2800 ATK and 2000 DEF. As such, this monster's effect is likely derived from the effect of Guardian Angel Joan. d'Arc in this card's name appears to be a pun, being utilized as a homophone for dark, since this monster appears to be an evil version of Joan of Arc.