82 Level 8 "D/D" monsters
After this card is Xyz Summoned, for the rest of this turn, other cards and their effects cannot be activated on the field, and other cards' effects on the field are negated. Once per turn, during either player's turn: You can detach 1 Xyz Material from this card; destroy all Spell and Trap Cards on the field. You can detach 1 Xyz Material from this card, then target 1 "Dark Contract" Spell/Trap Card in your Graveyard; Set that target.3500/3000
CARD ID: 15939229
Powered by yugioh.wikia.com 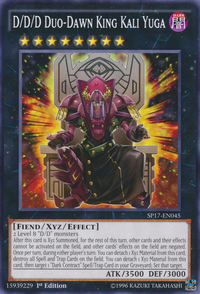 This card's name is derived from Kali Yuga, the last of the four stages the world goes through as part of the cycle of yugas described in the Sanskrit scriptures, within the present Mahayuga. In particular, Kali Yuga is associated with the apocalyptic demon Kali. The Duo-Dawn is the event when the world would be destroyed. The sun would keep on duplicating, with the duplicated sun out of Surya the Sun God's control. These duplicates would continue generating heat until it burns everything. This card's name contains a pun similar to that of D/D/D Doom King Armageddon and D/D/D Oblivion King Abyss Ragnarok: Sōgyō (双暁) can be written as 創業, which means Establishment. Notably, the first time Declan Xyz Summoned this card by overlaying those two monsters in the anime.