Fiend / Link / Effect 2 "D/D" monsters
If this card is Special Summoned: You can activate this effect; you cannot Special Summon monsters for the rest of this turn, except "D/D" monsters, also place 2 "D/D" Pendulum Monsters with different names from your Deck in your Pendulum Zones, and if you do, take 1000 damage. If this Link Summoned card is destroyed by battle with an opponent's attacking monster, or by an opponent's card effect while in its owner's Monster Zone: You can Special Summon 1 "D/D" monster from your Extra Deck or GY in Defense Position. You can only use each effect of "D/D/D Abyss King Gilgamesh" once per turn.ATK/1800 [LINK-2]
CARD ID: 09024198
Powered by yugioh.wikia.com 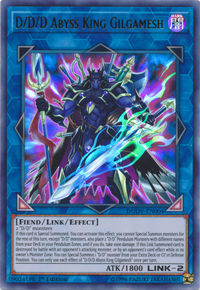 This card is the only Link Monster in the D/D/D sub-archetype. This card's Japanese title (Shin'en'ō) is a reference to the business title of CNO or Chief Networking Officer. This is also a reference to it being the first Link D/D monster. This monster is named after the historic king Gilgamesh, a major hero in Mesopotamian mythology and the protagonist in the Epic of Gilgamesh. The overall appearance of the monster, particularly its use of multiple weapons, seems to be based on the recurring character  from the Final Fantasy series and/or the  from the Fate series.