Normal / TrapIf you Link Summon a Link Monster: Target 1 monster in your GY used for that Link Summon; Special Summon it.
CARD ID: 04433488
STATUS TCG: Not yet released
Powered by yugioh.wikia.com 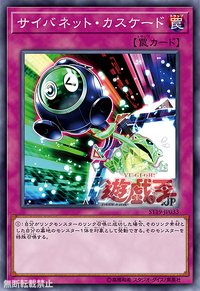 This card's name may be based on cascading style sheets (CSS), which is is a style sheet language used for describing the presentation of a document written in a markup language like Hypertext Markup Language (HTML), which is used in website development.  As CSS defines layouts, colors, fonts, hyperlink behaviors, etc., CSS can be seen as essentially the crayons that color in websites/web pages whereas HTML is basically the pen that writes their outer skeletal layout. This card's artwork also backs this CSS connotation up: Linkuriboh and Texchanger appear in this card's artwork; these monster names could also both be callbacks to CSS concepts:   Linkuriboh could come from the fact that CSS can have their own separate files (.css) and thus be linked to HTML files (.html/.htm) externally to use them.  Moreover, the CSS3 logo (the latest version of CSS) consists mostly of a blue shield; it is the same color of Link Monster card colors, of which Linkuriboh is as well as it being the predominant color of this monster. Texchanger is a portmanteau of the words text and exchanger.  CSS is a textual programming language.  Furthermore, this monster's color (green) matches the official color of Adobe Dreamweaver, one of the most well-known code-editing softwares that can be used to develop and edit web page content. This card's background is composed of colors within the visible light spectrum, furthering tie-backs to CSS, as this programming language typically dictates web page color schemes.  Furthermore, the link arrow plane that appears when a Link Summon is performed in the anime also appears in this card's background--also harking back to how external .css files can link to .html pages to express CSS elements in a web page.