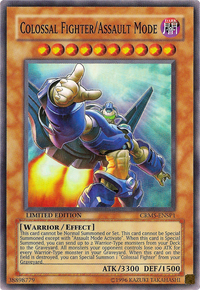 This is the only :/Assault Mode monster to be released as a promotional card for a Sneak Peek. This card's effect is the opposite to that of Colossal Fighter since it decreases the opponent's monsters' ATK instead of increasing its own ATK. The jet pack this card possessed is similar to Vindikite R-Genex.