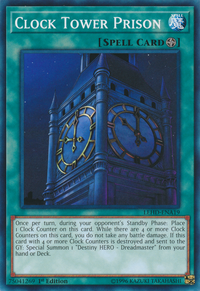 This clock tower is based on the Elizabeth Tower, which is more commonly referred to as the Big Ben. This clock tower appears in the artwork of Eternal Dread and D - Tactics. In the anime, the materialized clock tower is shown to strike 3, 6, and 9 o'clock for the first, second, and third Clock Counters placed on this card (respectively), finally striking 12 o'clock and vibrating ominously when the fourth Clock Counter is placed. This card is the first Field Spell Card to have an effect that applies exclusively to its controller.

The effect that stops Battle Damage is a Continuous Effect that cannot be chained to.

If "Spell Canceller" is Summoned or "Imperial Order" is activated, all the Clock Counters will be removed from "Clock Tower Prison".

Destiny HERO - Dreadmaster: "Destiny Hero - Dreadmaster's" second sentence is applied if he is Special Summoned by any method, not just by the effect of "Clock Tower Prison".