42 Level 4 DARK Dragon monsters
Neither player can target this Xyz Summoned card with monster effects, except its own. Once per turn: You can detach 1 material from this card, then target 1 face-up monster on the field; it loses 600 ATK/DEF, then, you can Special Summon 1 "Borrel" monster from your GY, but banish it during the End Phase, also you cannot Special Summon other monsters or attack directly for the rest of this turn.3000/2500
CARD ID: 06247535
STATUS TCG:
Powered by yugioh.wikia.com 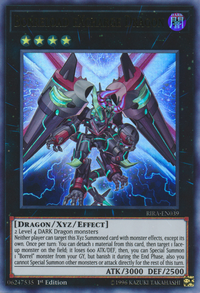 This monster is the cover card of Rising Rampage. This card has the highest ATK for a Rank 4 Xyz Monster. This card is the only Xyz Monster in the Borrel archetype. It is also the only member of this archetype to have neither a Level nor a Link Rating. It is also the only Xyz Monster used in Yu-Gi-Oh! VRAINS whose Type is not Cyberse. This card is an Xyz counterpart to Borreload Dragon. This monster bears a nearly amalgamated resemblance to a few mecha from other anime. Its shape and color scheme resemble the Super Galaxy Gurren Lagann from Tengen Toppa Gurren Lagann. Its sizes and appearance seems to resemble the titular Gunbuster. Its shoulders resemble the piston forearms of the titular Big O. Much like Borreload Dragon and Firewall Dragon, this card and Firewall eXceed Dragon appear to contrast and mirror each other's poses and have opposite color schemes, showcasing a rivalry between the two cards. In addition this card and Borreload Dragon also have the same Rank/Link Rating as their Cyberse counterparts, but have stricter materials (this card needs DARK Dragon monsters and Borreload Dragon needs +3 Effect Monsters to summon).