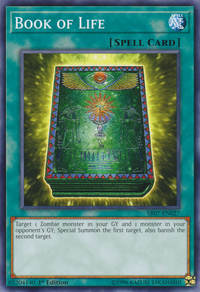 This card is a reference to the real ancient Egyptian book, the Book of the Dead. This book supposedly helped people in their journey to the after-life. Thus, this card being the Book of Life would similarly help people return to the world of the living. This card has three other counterparts: Book of Taiyou, Book of Moon and Book of Eclipse". This is the only card out of the four that does not change the battle position of monsters. This card is also the only one with effect that affects only one specific Type - in this case, Zombie.

You cannot activate "Book of Life" if there are (1) no monsters in your opponent's Graveyard and/or (2) no Zombie-Type monster in your Graveyard.

The effects targets the two Monsters.

If the Zombie-Type monster targeted by an effect like "Book of Life" or "Mezuki" or "Zombie Master" is not a Zombie-Type monster at resolution - for example, "Mystical Space Typhoon" was chained and destroyed "Zombie World" - then the effect which Special Summons the monster from the Graveyard is not applied. Also, for "Book of Life", its effect which removes from play one card in your opponent's Graveyard is still applied.
You cannot activate "Book of Life" if there is no monster in the Graveyard to remove from play.

You cannot activate "Book of Life" if your opponent controls "Kycoo the Ghost Destroyer".

Removing from play the opponent's monster is not a cost. The effect targets two monsters.