10"Blue-Eyes White Dragon" + "Blue-Eyes White Dragon"
Must be either Fusion Summoned, or Special Summoned by sending the above monsters you control to the GY (in which case you do not use "Polymerization"). Cannot be destroyed by battle. This card can make up to 2 attacks on monsters during each Battle Phase. At the end of the Damage Step, when this card attacks an opponent's monster, but the opponent's monster was not destroyed by the battle: You can banish that opponent's monster.3000/2500
CARD ID: 02129638
STATUS TCG: Unlimited
Powered by yugioh.wikia.com 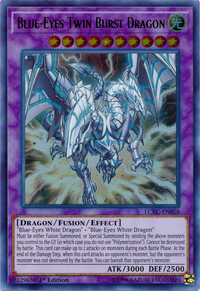 This card can be considered a counterpart of Cyber Twin Dragon, as both monsters use two copies of their archetype's main monster as their Fusion Materials and can attack twice per Battle Phase. This card, Supreme King Dragon Starving Venom, and Beast-Eyes Pendulum Dragon are currently the only Fusion Monsters that can be Special Summoned either with any card that Fusion Summons or by Contact Fusion. Visually, this monster appears to be a fusion of two Blue-Eyes Alternative White Dragons. This card has the following distinctions from the other Blue-Eyes Fusion Monsters: It is the only one whose Level is not 12. It is the only one whose ATK is not 4500. It is the only one whose DEF is not 3800.