1You can send this face-up card you control to the Graveyard; Special Summon 1 "Red-Eyes B. Dragon" from your hand.800/500
CARD ID: 36262024
STATUS TCG: Unlimited
Powered by yugioh.wikia.com 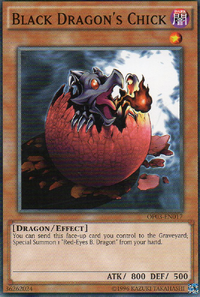 Ignition Effects on monsters cannot be activated while the Effect Monster is face-down. So this face-down monster cannot be Tributed for its own effect.

Divine Wrath: You can activate "Divine Wrath" when "Black Dragon's Chick" is Tributed for its own effect.