Beat Cop from the Underworld

Fiend / Link / Effect 2 monsters
If this card is Link Summoned using 2 DARK monsters with different names as material, it gains this effect.
●You can Tribute 1 monster, then target 1 face-up card on the field; place 1 Patrol Counter on it. You can only use this effect of "Beat Cop from the Underworld" once per turn. (If a card with Patrol Counter would be destroyed by battle or card effect, remove 1 Patrol counter from it instead.)ATK/1000 [LINK-2]
CARD ID: 99011763
STATUS TCG: Unlimited
Powered by yugioh.wikia.com 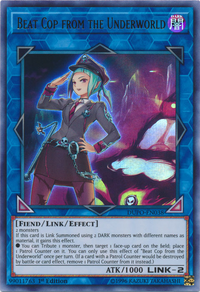 This monster might be working for the Stygian's, as she's an underworld  and has a    that Stygian Security wields. She also may have some relation with Tour Guide From the Underworld, as both appear as human-like girls and drive shadowy vehicles. Both monsters also share the same ATK value of 1000 points. The effect of Tour Guide From the Underworld could also be used to Link Summon this card in the same turn which could be viewed as a further reference to the possible relation of those two monsters.