Continuous / SpellOnce per turn: You can pay 500 Life Points, then declare 1 card name; excavate the top card of your Deck, and if it is the declared card, add it to your hand. Otherwise, send it to the Graveyard.
CARD ID: 22796548
Powered by yugioh.wikia.com 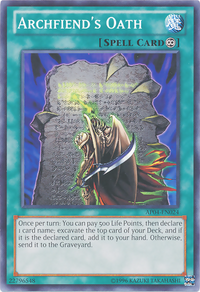 {{RulingFlagged">TCGJudgeProgram =
In place of declaring a FULL card name, a precise description of a card's stats, appearance, and/or effects, is considered acceptable so long as both players are in clear agreement over which card is being described.

If you have multiple copies of "Archfiend's Oath", you can use all of them.