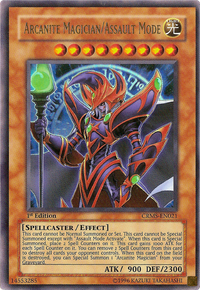 A reversed Dark Magical Circle appears in this card's artwork. The armor of this monster appears in the artworks of Arcane Apprentice and Assault Overload. The cloak this monster wore as Arcanite Magician has been removed, though a part of it is now used as a cape. This card has the lowest original ATK of all /Assault Mode monsters. Despite having more ATK, Supreme Arcanite Magician has a weaker effect than this card.

Removing two Spell Counters is a cost to activate the effect which destroys the cards your opponent controls.